skip to main | skip to sidebar

The Devil is in the Details: A Devil Mountain 50K Race Report Devil Mountain is a very well done set of races by people who know and love trail running. There are three races going on at the same time, the 50-mile, 50K and half-marathon. The run pretty much offered everything in equal measure, fast dirt roads, good single track and ATV trails, fairly significant climbs, fun descents and sections that were very rocky and challenging. However, this race is challenging to the degree that a road runner out to try the trails would probably completely freak out and given the pastoral pictures posted on the website, many trail runners will be taken aback. 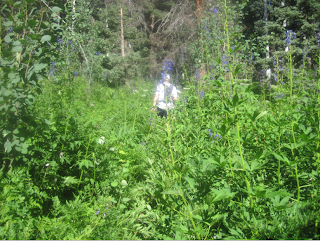 For example, as one reviewer from last year put it “There were wild flowers that stood shoulder high in places.” Well, that was certainly true, there were sections that had such dense undergrowth that you could not see the trail you were running on and the path opened and closed around you like a zipper of green. In that section there were also bugs the size of walnuts zipping around your head as you ran if you were strong enough to run that segment of trail. If not, well, I suppose you would have expended a lot of energy slapping and flailing your arms.

I also discovered early on that it is a good idea to carry enough of your own nutrition to last through about mile 18. The first two aid stations only had 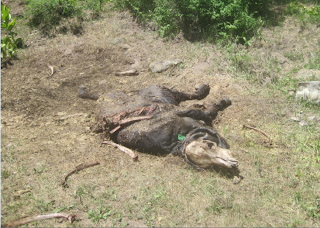 water and HEED. I can't drink HEED. I was thinking to myself as I sucked down my last gel, “This could be a particularly difficult day. I wonder what all these plants around me taste like and more importantly, how many are likely to kill me if eaten?” Well, I eventually got the answer to that last question; at least one. It just so happens that on Devil Mountain hemlock grows wild. Indeed, some of the aforementioned dense foliage that I was running through was hemlock. I did not discover the existence of hemlock on the mountain because I am a botanist or because I found Socrates dying in some mountain meadow; no, I came upon a great stench and as I rounded a bend in the trail was treated to the lovely sight posted herein. The partially eaten and decomposed body of a cow, who apparently had as little training in botany as I. 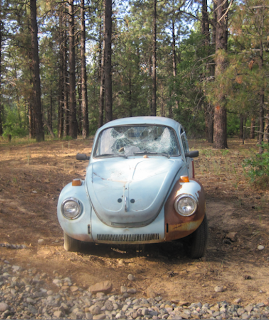 rea who tend to eat not only incredibly toxic plants but trail markers as well. When they aren't eating the trail markers they are trampling them. There was one junction where all markings were stripped away and you just had to guess which way to go. Me and a couple people came to this intersection where the ATV trail we had been running on went sharply right and a narrow little track continued straight through a big clearing. We had been told that in sections where there were junctions there would be markers all over indicating where to go. This intersection had a clothes pin with about ¼ inch of ribbon on it hanging in the branch of a dead tree that was sitting near the middle of the intersection. To make matters more confusing the little track that went straight had a couple logs laid across it as if to say “don't go this way” and the marker flags that we were told would mark the trail when it crossed open field were nowhere to be seen in this, or any, field. However, the ATV trail we had been on didn't have any markers either. Apparently getting lost is not uncommon on Devil Mountain. 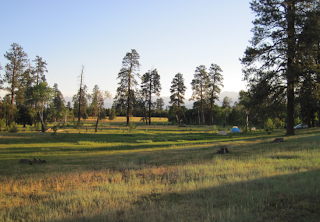 Anyway, when I got to that intersection there were already two guys there puzzling over the situation. They kind of set the stage for the confusion by already having decided that the clothes pin “was slightly more toward the narrow track than the ATV trail but these logs seem to indicate that we shouldn't go that way.” I'm not sure what I would have decided had I come upon it alone but I didn't come across it first so there we were.

There was a woman running the 50-mile who decided to run the narrow trail across the field and I thought “What the hell, we haven't run across a field yet and there are supposed to be some out here so why not.” I followed her for about a mile until we reached the woods again and there were still no markings. I turned back and she kept going. She ended up making the right decision and I ended up running the field twice and picking up some bonus miles. When I got back to the cow ravaged intersection there was a group of about 10 runners standing around scratching their heads with more coming up the trail. Things were just getting more confusing so I just turned around and went back and was, of course, eventually rewarded by unmolested trail markings.

Shortly after getting back on course though, there was suddenly a lot of whooping and hollering. I was running along oblivious to all but the trail and happily listening to my iPod. I wondered what all the commotion was about and suddenly a cowboy on horseback burst from the woods waving and yelling. Like any good (stupid) tourist I immediately stopped, pulled out my camera and snapped a shot of the cowboy in the woods. This action didn't seem very satisfactory to him. In fact it seemed to agitate him 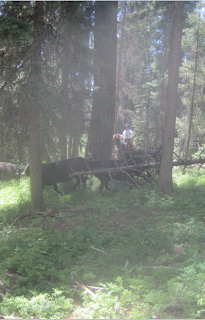 further. It occurred to me that maybe I should have asked his permission to snap his picture after all he is some kind of old west guy, right? Maybe he thought I stole his soul with my magical flashing box.

It turns out he probably wasn't too worried about the picture. As I was standing in the trail, iPod blasting and camera in hand another noise began to encroach on my senses and I casually glanced to my left in time to see a heard of cattle surging up the trail with a group of other cowboys in hot pursuit. Snapped from my reverie I sprinted into the woods for all I was worth crashing through brush and branch, hurdling fallen trees and leapfrogging desk-sized rocks. Now breathless and safely out of harms way I turned to see the trail I had just been standing on churned into a pall of dust and freshly released chlorophyll. The cowboy I has seen first smiled, tipped his hat and quietly disappeared into the woods.

Are you getting the picture yet? This wasn't any double mochachino, ciabatta bread serving psudo-trail race; no, this was the real deal.

I realize that my little story here isn't exactly selling this race but I do want to stress that the race management is both earnest in their love of honest to god trail running and flatly honest about what you can expect once out on the course. As stated in the race information, there are some longish sections between aid that can take a lot of time and this year it got really hot so it was indeed a good idea to bring plenty of capacity to carry your own fluids. During the last six miles of the race i 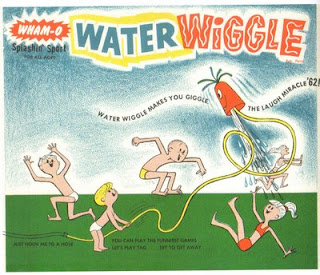 t was absolutely baking and there were few segments with shade. I was carrying a hydration pack and two water bottles and was sure to top everything off with water and ice. I probably passed five or six people all of whom were carrying only one bottle. I was able to drink from the pack and keep myself somewhat cool with the two hand held bottles by spraying myself and soaking my hat. I was basically running through the heat of the day smiling with my own personal water wiggle while the others were miserably baking in their own personal hell.

It really was a good race and is one that I recommend to all my friends (and enemies but without any warning). The rest of the aid stations had plenty of stuff including Hammer Gels, cookies, S-caps, ice, M&M's etc...and the volunteers were very helpful and got you through the aid station quickly and efficiently. The hand crafted “over-all” winner awards were absolutely to die for; big devil figures made from red painted rail-road spikes carrying a pitch fork with one foot up on a rock so it really looked like it was cli 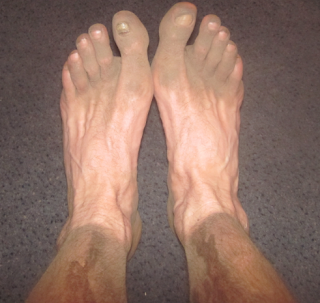 mbing up rough trail. The whole thing was mounted on a mountain bike chainring. Holy cow I have never wished more to be faster.

My race, aside from all the adventure, went really well. My time of 6:37:34 (by my Garmin for a distance of 32.38 miles) was good enough to land me in 4th place in my age group and, if I counted right, 12th place overall. It was a very tough training run for Leadville but it is the last tough run I have left. Now I have a couple more high, but relatively easy, mileage weeks and then it's taper time!
Posted by S. Baboo at 2:27 PM

S. Baboo
I'm a high school football lineman turned rugby tight-head prop turned couch potato. In regaining my health and fitness I've gone from sprint distance triathlete to century cyclist to Ironman and now on to Ultra Runner. How someone of my size found such a love for extreme endurance events I'll never know but I have and these are my stories.