skip to main | skip to sidebar

Fast in the water and light on my feet 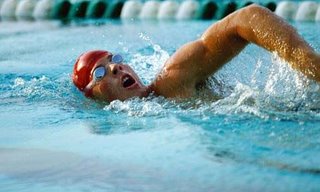 Ok, so maybe I'm not actually fast in the water or light on my feet but here are two news items for you to ponder.

As to the "light on my feet" bit, like I said I had my follow up appointment today to check in on my hip. It's a confirmed fracture. Doc said "if it was something bad (such as an infection in the bone) it would have gotten worse and yours has gotten better." We took a look at the MRI together and sure enough I have stuff inside me. He pointed out the blurry white area that represented the fracture and I could tell that it was different from the othe

r side of the picture but that's about it. You could kind of see a like right along the line of fracture but you really have to know what you are looking at.

ANYHOW, I digress. All I wanted to mention is that my kind of fracture is very rare. It is usually only found in Ballerinas...and...endurance atheletes. Thank god, my teammates would never let me hear the end of it if the injury was limited to ballerinas. So, three more weeks and I get to try out my running legs again and then, look out Barishnikov!

S. Baboo
I'm a high school football lineman turned rugby tight-head prop turned couch potato. In regaining my health and fitness I've gone from sprint distance triathlete to century cyclist to Ironman and now on to Ultra Runner. How someone of my size found such a love for extreme endurance events I'll never know but I have and these are my stories.